The Best Of Branson

In all, the Blackwood Singers have been awarded eight Grammys, 27 Dove Awards, five All-American Music Awards, the Publishers Choice Diamond Award, and the coveted Living Legend Award in Gospel Music. In addition to all the accolades, the family has also performed with the likes of Johnny Cash and June Carter, Dolly Parton, Larry Gatlin and the Gatlin Brothers, and pop icons such as Frankie Avalon, Cher, and Sammy Davis, Jr. The Blackwoods were a big part of the Branson music scene for many years with their own show at the Ozark Jubilee Theater, before moving to Pigeon Forge where they based their show for 15 years.. Today, the Blackwood family legacy is carried on today by R.W. Blackwood Jr. and his wife Donna.

The Blackwoods are known throughout gospel music circles for their pure family harmony, excellent musicianship, and first class entertainment. With an 80 year track record of hits, The Blackwoods bring hand-clapping, high energy entertainment to the stage. To quote a recent fan, “The show is American, family, loyalty and excellence all rolled into two hours that will leave you spellbound!”

The show is a stroll down memory lane with history and video of the original Blackwood Brothers and the Blackwood Singers and the songs that made them a household name. A rousing veteran’s tribute is always a part of the show as is that feeling of family that audience members experience this great performance.

A new addition to the show this year is a younger generation of Blackwoods who will be performing throughout the summer months and of course the Blackwoods end their performance with a fabulous tribute to our country in their patriotic finale! This high energy show will captivate every audience! 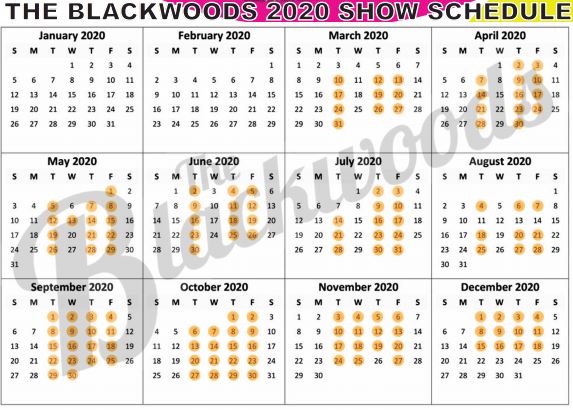 Is this your business?

You won’t be disappointed if you see this. It’s a must! They are so talented!!

Did you find this review helpful?

The Pointe at Pointe Royale

Branson Cedars Resort is a 133-acre resort located only 9 miles south of Branson and adjacent to Big Cedar Lodge and Top of the Rock. The resort is family and pet friendly and a great location for just a weekend getaway or a weeklong stay.

The Bretts Show is not your average family variety show. With a dizzying array of awards and accomplishments, this dynamic family produces a power-packed, two-hour entertainment experience that combines the best in music, lighting, video, and dance.